A feature-based tracking algorithm for vehicles in intersections

The importance of reducing the social and economic costs associated with traffic collisions can not be overstated. The first goal of this research is to develop a method for automated road safety analysis using video sensors in order to address the problem of a dependency on the deteriorating collision data. The method will automate the extraction of traffic conflicts (near misses) from video sensor data. To our knowledge, there is limited research primarily applied to traffic conflicts. In this paper a method based on the clustering of vehicle trajectories is presented. The clustering uses a k-means approach with hidden Markov models and a simple heuristic to find the number of clusters automatically. Traffic conflicts can then be detected by identifying and adapting pairs of models of conflicting trajectories. The technique is demonstrated on real world video sequences of traffic conflicts.

Click on the images below to see demonstration video sequences of the tracking results of the approach (that was used to train traffic conflict observers). 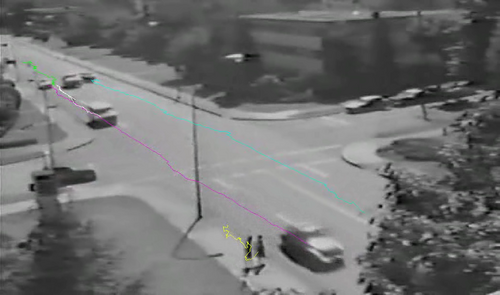